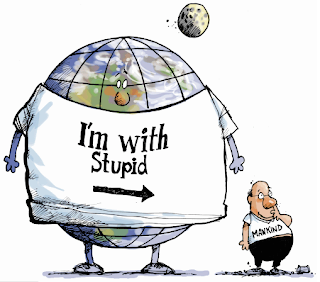 I've never been a fan of Micheal Jackson...sure Thriller was a top selling album, and although it was in my former household, it wasn't in my personal collection. Speaking of collections, Michael Jackson was to auction off items from Neverland, the auction was cancelled but not before Linda Coffey took a tour and posted it on YouTube

http://www.youtube.com/watch?v=DWSze2pZZas
Posted by Lou at 6:24 p.m. No comments:

To J.G. Ballard, dead Sunday morning at age 78 according to the BBC. Extraordinary writer, extraordinary life.
Some of his novels, off the top of my head:
Crash
The Crystal World
The Drowned World
The Atrocity Exhibition
Empire of the Sun

There's a website dedicated to him (with a massive amount of content), a website that seems dedicated to journaling his influence,and, of course, a Wikipedia page. Hell of a thing, that he's gone.

Exactly 10 years ago on Monday, the world woke up to learn that two more unhinged American teenage misfits had snapped after years of bullying at the hands of the "jocks", the sporting overlords of their universe, and gone on a murderous rampage with semi-automatic weapons through their suburban high school.

Or that's the version we were told, anyway.

The teenagers were called Eric Harris and Dylan Klebold, and their school was Columbine High, an idyllic sounding place nestled between the Denver metropolitan area and the foothills of the Rocky Mountains. What is indisputable is that Columbine quickly became a byword for the nightmarish phenomenon - now seemingly a worldwide contagion - of school shootings. It was the bloodiest, creepiest, most vivid school attack anyone at the time could remember and remains, to this day, the episode the American popular imagination just can't seem to shake.

Harris and Klebold did not just gun down their victims in cold blood. They laughed and hollered while they were doing it, as though they were having the time of their lives.

In contrast to previous American school shootings, which had unfolded in hard-to-reach locales such as West Paducah, Kentucky, or Jonesboro, Arkansas, this one happened half an hour's drive from a major media hub. Denver television crews got there while the horrors were unfolding, and the cameras did not stop rolling for a week.

So starts Andrew Gumbel's Guardian article The Truth About Columbine in the Friday paper. In the article he discusses the role of the media, the echo-chamber that established the mythology, and the more and less horrible truth about what actually happened that day 10 years ago.
The stand-off? Didn't happen. The shooting was the SWAT team moving through the building looking for Harris and Klebold--who were long-dead and lying in the cafeteria. Cassie Bernall, asked if she believed in God and was shot when she said "yes"? Just shot. Another girl, Valeen Schnurr,  asked if she believed in God, said "yes" and was spared. And the boys as Marilyn Manson-worshipping losers? Not so. Reasonably popular, the boys didn't listen to Manson at all. Really, an article worth reading. And then think about media complicity,our complicity, in generating myths instead of dealing with what really happened.

Yes, Thank You. Now Where's Ours?

President Barack Obama on Thursday outlined plans for a high-speed rail network he said would change the way Americans travel, drawing comparisons to the 1950s creation of the interstate highway system.

Obama was careful to point out that his plan was only a down payment on an ambitious plan that, if realized, could connect Chicago and St. Louis, Orlando and Miami, Portland and Seattle and dozens of other metropolitan areas around the country with high-speed trains.

The question is, when is the Canadian government going to figure this out? 2070?
Bill Curry, writing in today's Globe and Mail (17 April 2009), points out how it is the fear of protectionism in the US that's driving Canada to begin the process of harmonizing our environmental regulations with those of the US. Not because human life on the planet is at risk. Not because it is the right thing to do. But because trade with the US is threatened. This is too little too fucking late. We really need to be getting out in front on global climate change--and if that means shutting down the tarsands, or going nuclear, or imposing a hard cap on carbon emissions, then that is what it means. Harper is so resistant to anything past 1950 that he actually makes me long for the days of Brian Mulroney. Yeah, that one. There was actual progress made on environmental issues under Brian, even while he pimped the country out. Harper is just so not the prime minister we need in these times. He's just intractable, incompetent, and just plain obnoxious. Revolution Now!

Steps Towards Getting It.

In Britain, Labour has put forward a program to get people into electric cars; they're offering a £5000 rebate to purchasers.

Consumers are to be offered incentives of up to £5,000 to purchase an electric car under government plans to be unveiled today that will also see the creation of electric car cities across the UK and the launch of large-scale experiments with ultra-green vehicles.

The proposals are part of a £250m strategy, seen by the Guardian, spelling out a revolution in Britain's road transport network based on ultra-low carbon vehicles. It will be launched today by Geoff Hoon, the transport secretary, and Lord Mandelson, the business secretary, with the aim of kickstarting the market for cleaner road vehicles and slashing the UK's CO2 emissions.

The rest of the article is available on The Guardian's website.

And who guards us from the guardians?

G20 protest videos: Growing catalogue of evidence against police. An article with accompanying video foot age from The Guardian. 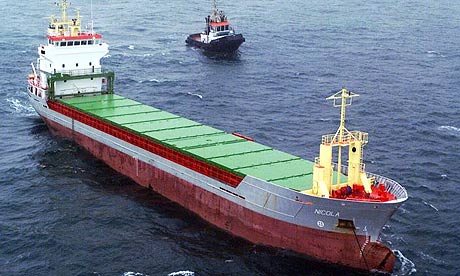 image from The Guardian

A recent study out of the Danish government's environmental agency adds to this picture. It suggests that shipping emissions cost the Danish health service almost £5bn a year, mainly treating cancers and heart problems. A previous study estimated that 1,000 Danish people die prematurely each year because of shipping pollution.
The Guardian report also suggest that shipping is responsible for 3.5% to 4% of all climate change emissions.

And after gardening, thoughts often turn to greenhousing. Everyone wants one, but not all of us can afford one. (Well, some of us have space issues as well, but there you go...). Well, as a lovely recycling alternative, Richard Bennett of Scottish sustainable development charity REAP, has designed and helps schools build these greenhouses.

They are constructed of dimensional lumber, garden stakes, and re-used plastic drinks bottles. For something so cheap and designed to be built by schoolchildren, they work surprisingly well. I suspect that they last better than plastic film as well, as drinks bottles are heavier and seem to be made of a UV-stabilized plastic. The REAP website has the PDF of how to build these sheds. Got a local middle school that needs a project?